Traditional radiation therapy appeared long time ago and has improved for many years. It is an effective method of treating many types of cancer. However, this radiation therapy come with side effects. Primary photons and secondary electrons release their energy along the beam path. The radiation affects healthy tissues on the way to the tumor and beyond. Such "exit dose" of radiation damages normal cells and can lead to late complications.

Proton therapy is the most precise
method of radiotherapy

The advantage of proton therapy is based on the physical property of protons to deposit most of their energy precisely at the tumor site. As they move through the body, protons slow down, interact with electrons and deposit maximum radiation at the end of their path. The point where the maximum energy is released is called the Bragg peak. Doctors can calculate the Bragg peak in the patient's body so that it would coincide with the center of the cancerous tumor. The proton beam is precisely shaped to conform to the shape and depth of the tumor while sparing the surrounding healthy tissues and organs.

Low risk of side effects during and after radiotherapy, and more rapid recovery of patients after the treatment

Reduced risk of cancer recurrence due to high precision targeting

Low risk of side effects during and after radiotherapy, and more rapid recovery of patients after the treatment

Reduced risk of cancer recurrence due to high precision targeting

How does it work?

To understand how proton therapy works, let’s have a look at the physical processes taking place inside the proton accelerator, the cyclotron, and the beam transport system. 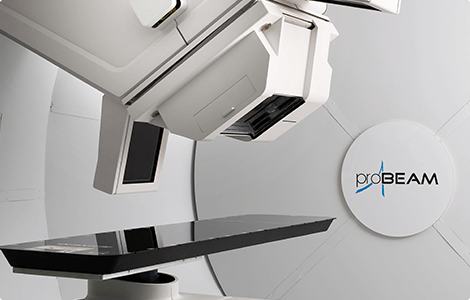 Pencil beam scanning (PBS) is an advanced method of proton therapy currently available in just a few centers in the world. This capability is available at MIBS Proton Therapy Center.

PBS technology is based on complex treatment planning systems and multiple magnets controlling the narrow proton beam, virtually "applying" layer by layer the dose of radiation. The proton beam moves along the vertical and horizontal axes, like a sharp pencil tip "painting" the entire tumor. As it makes its way through the tumor, its intensity is modulated. The maximum dose of radiation is delivered precisely into the cancer cells, while avoiding normal tissues.

Pencil beam scanning is very effective in the treatment of the most complex cancer cases, such as prostate, brain, eye and pediatric tumors. Intensity-modulated proton therapy is most suitable for the delivery of a powerful and accurate dose of radiation to complex or concave tumors located near the spine or inside the head, neck or at the base of the skull.

Who can benefit from proton therapy?

Proton therapy is used to treat many types of cancer in the clinics around the whole world. And often, it is the only solution for the patients.